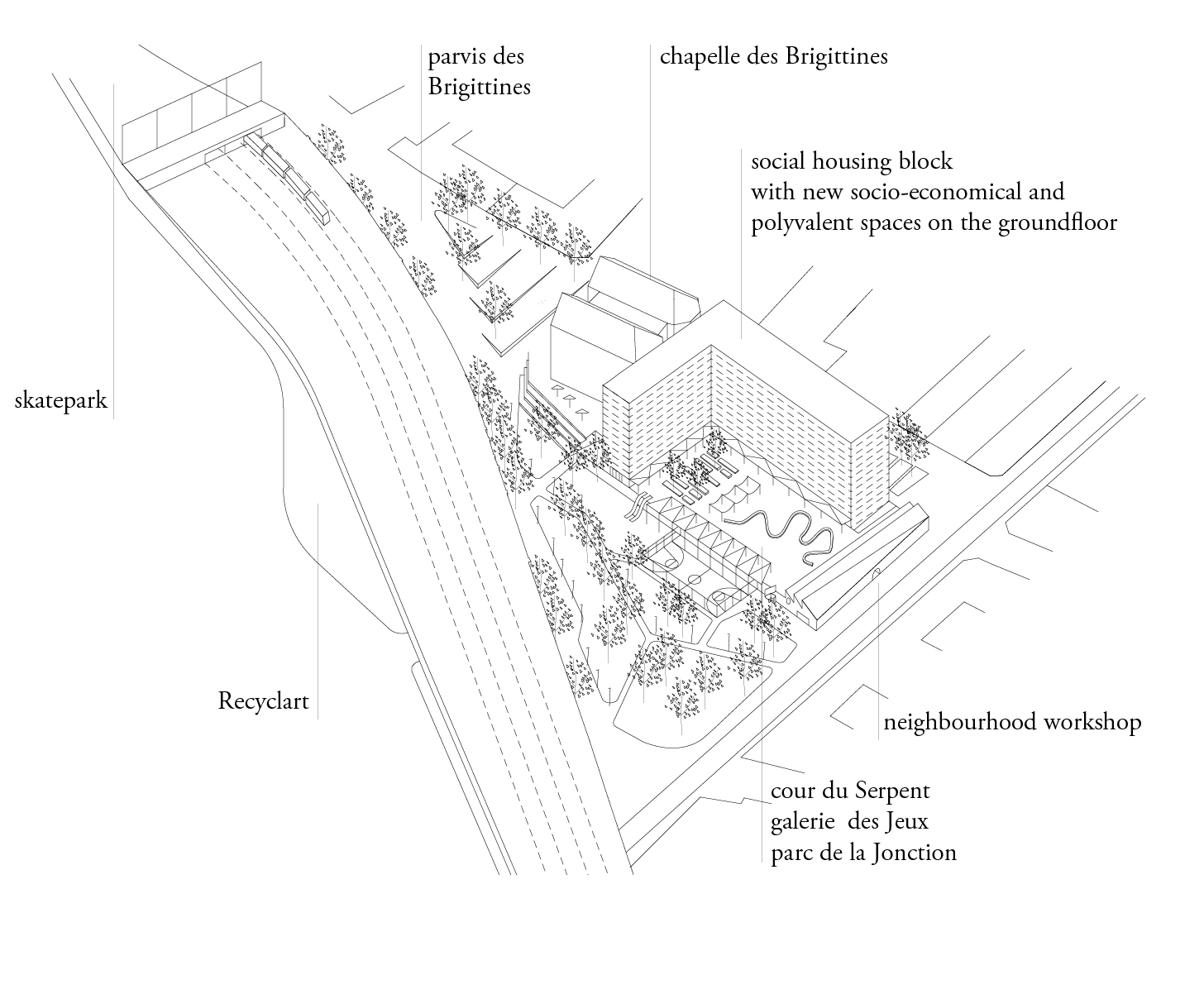 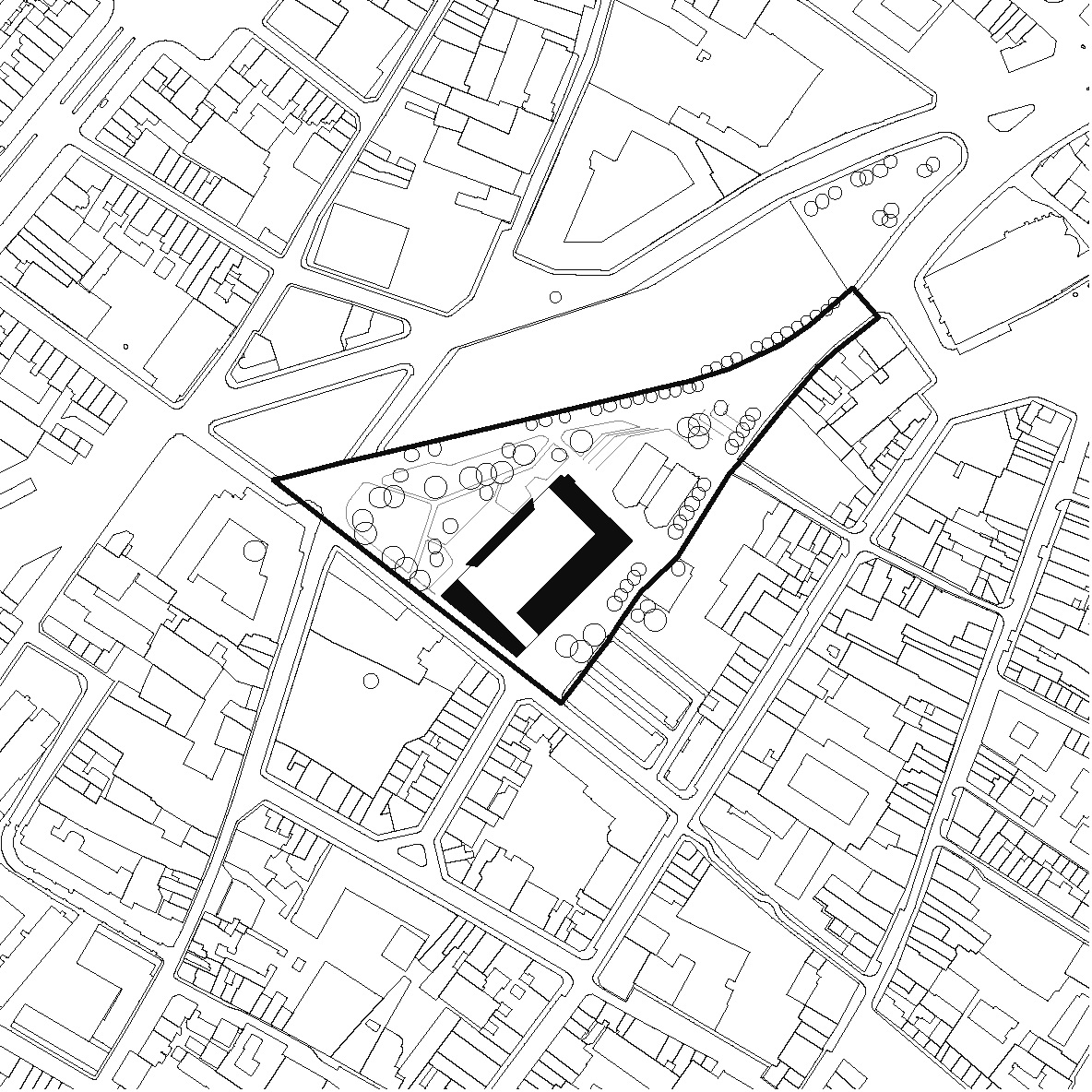 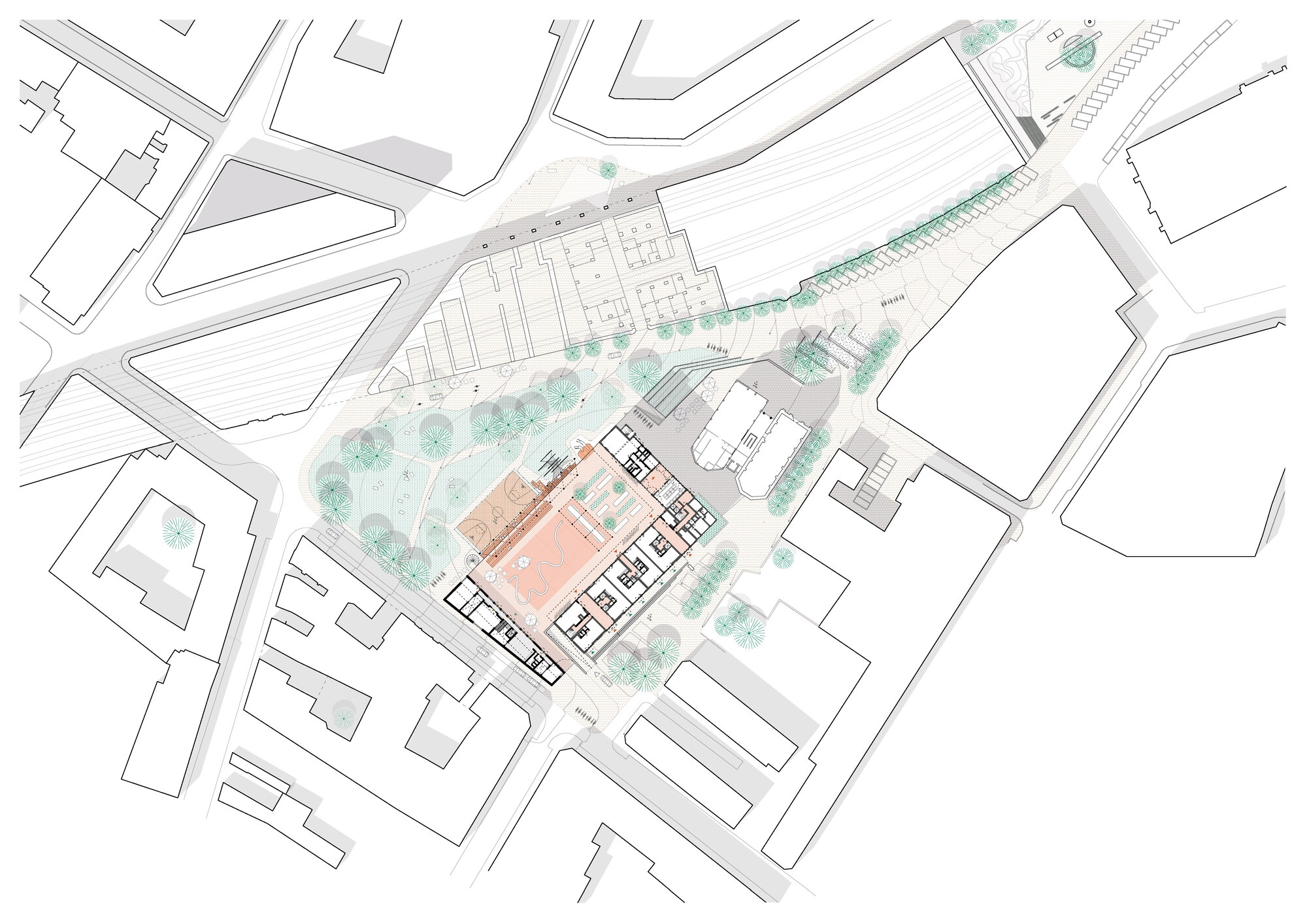 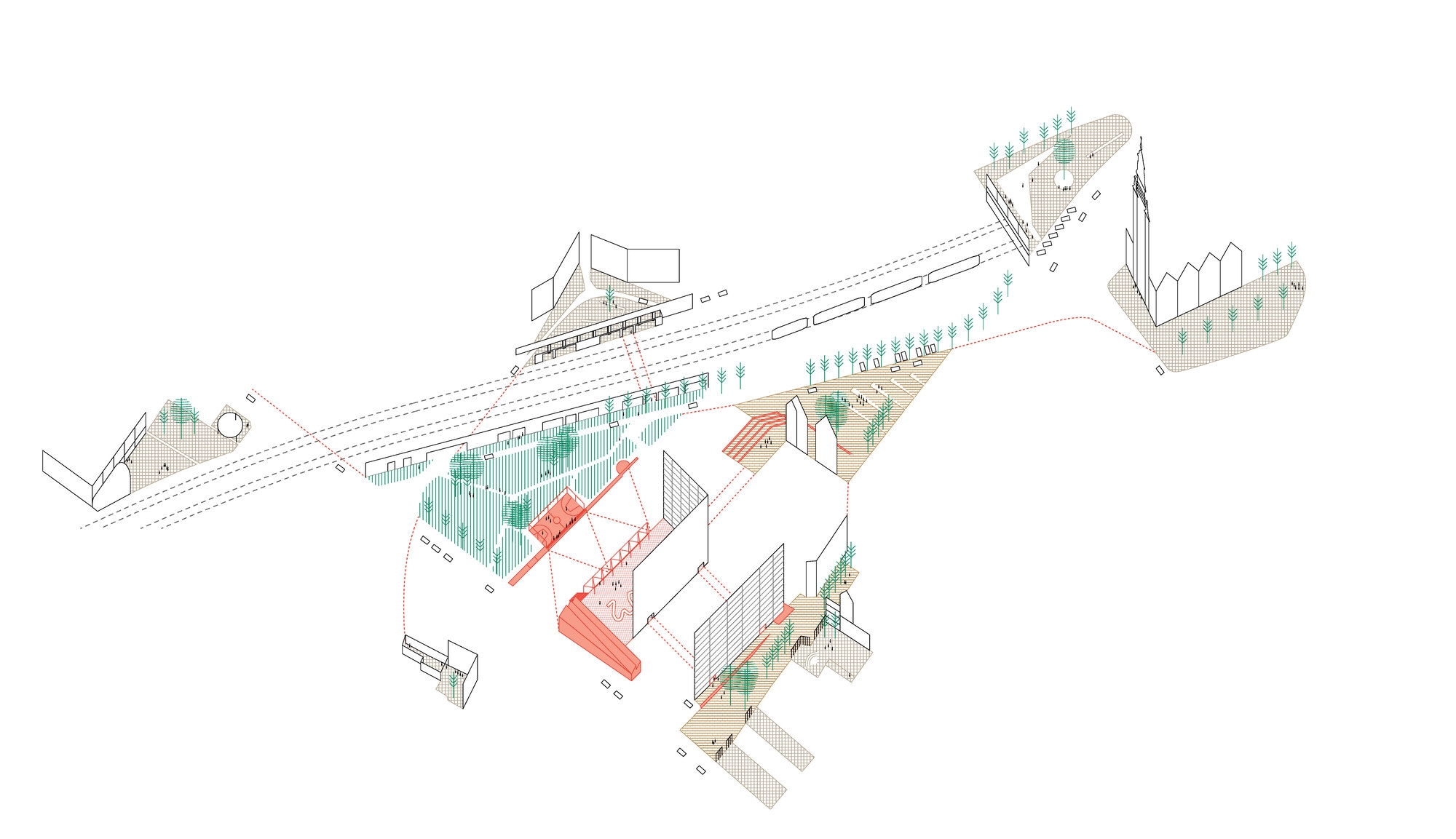 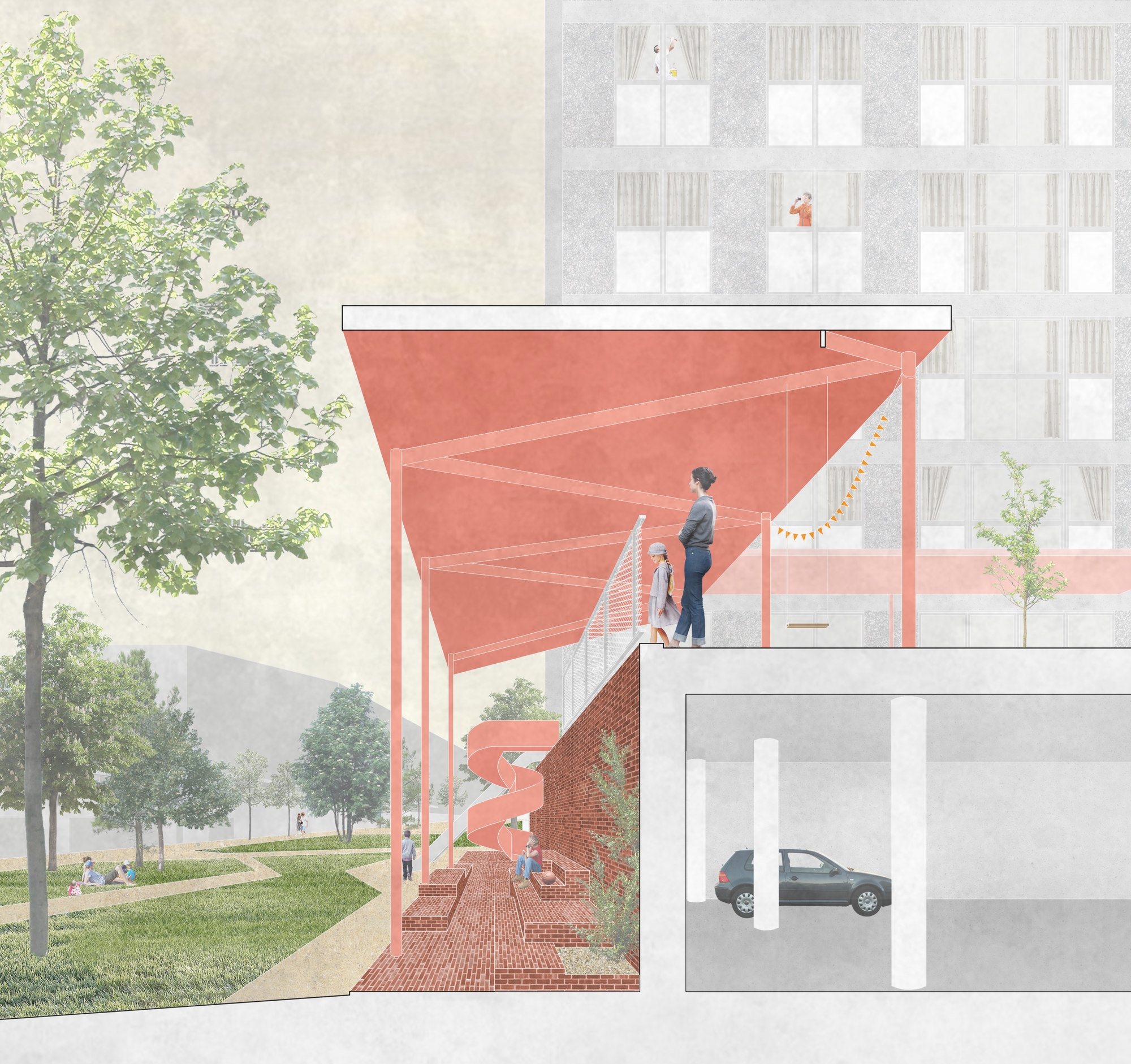 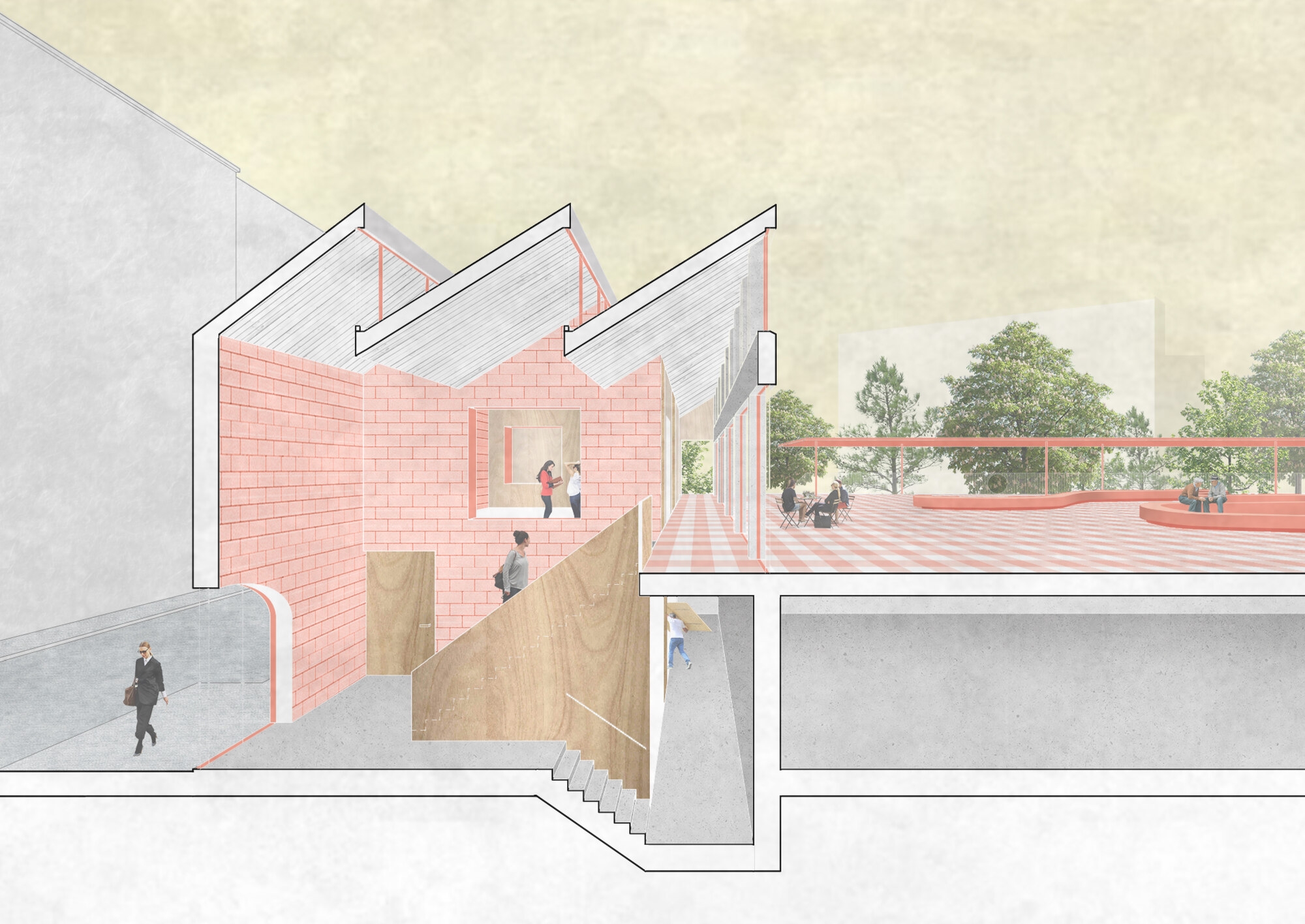 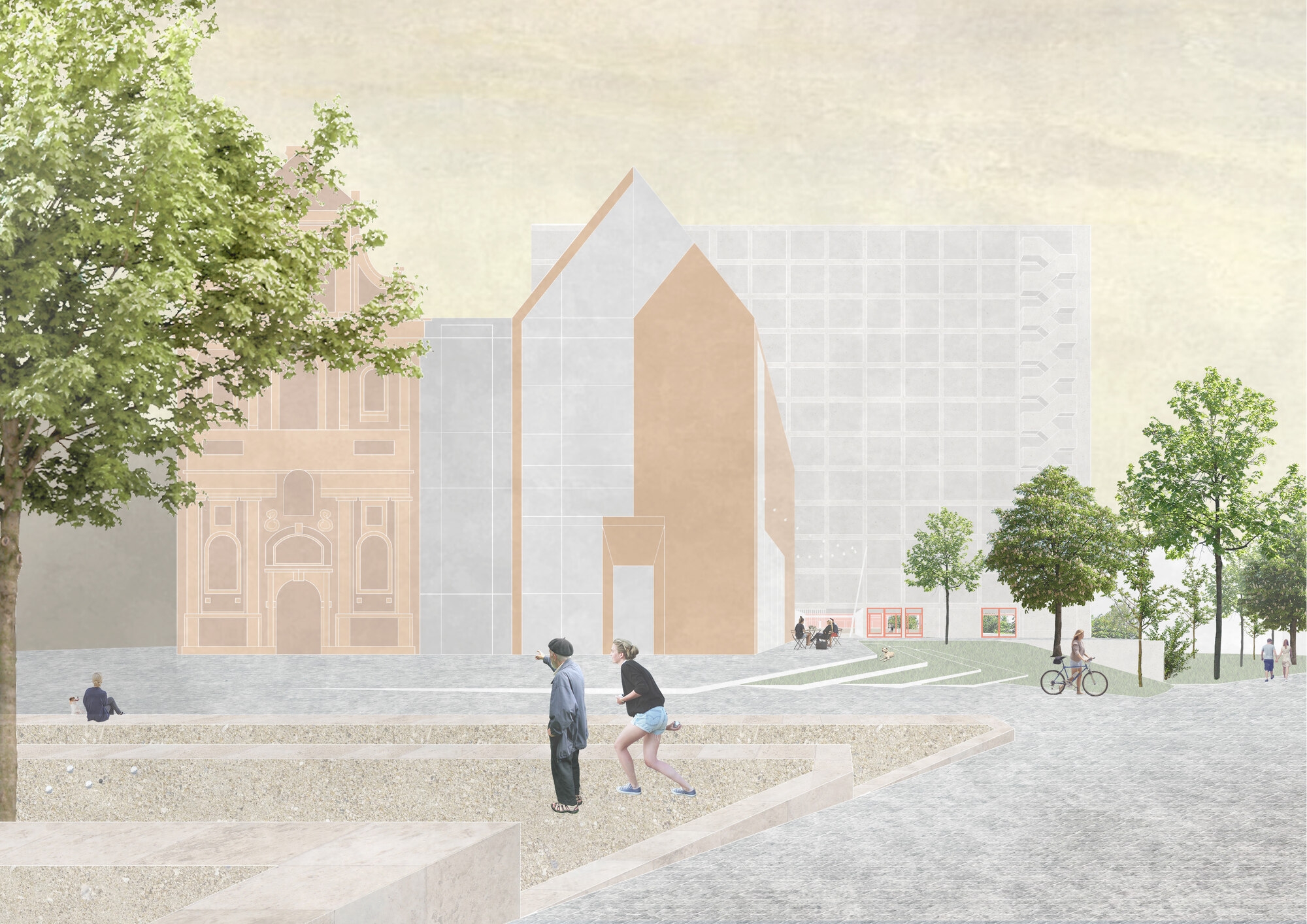 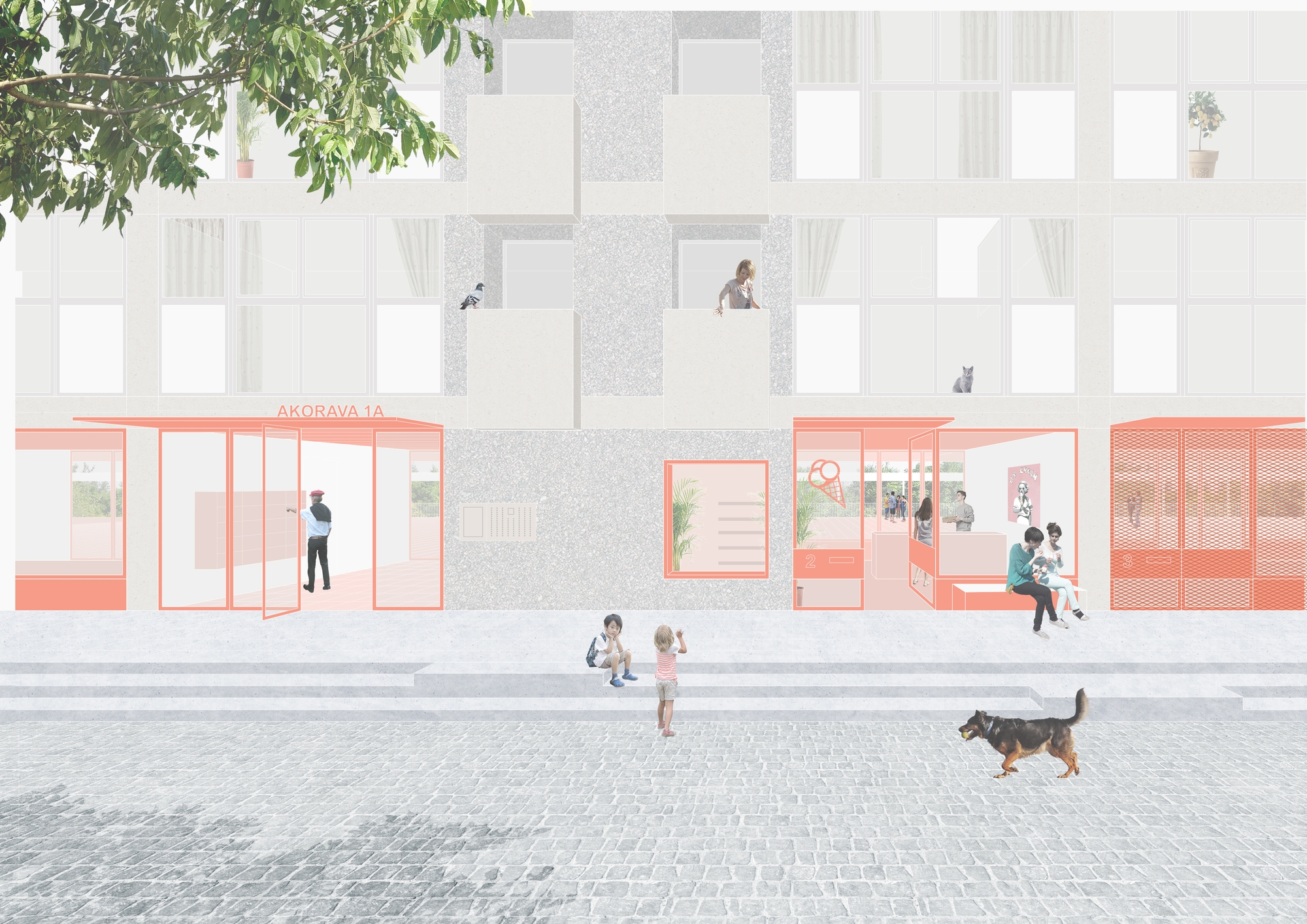 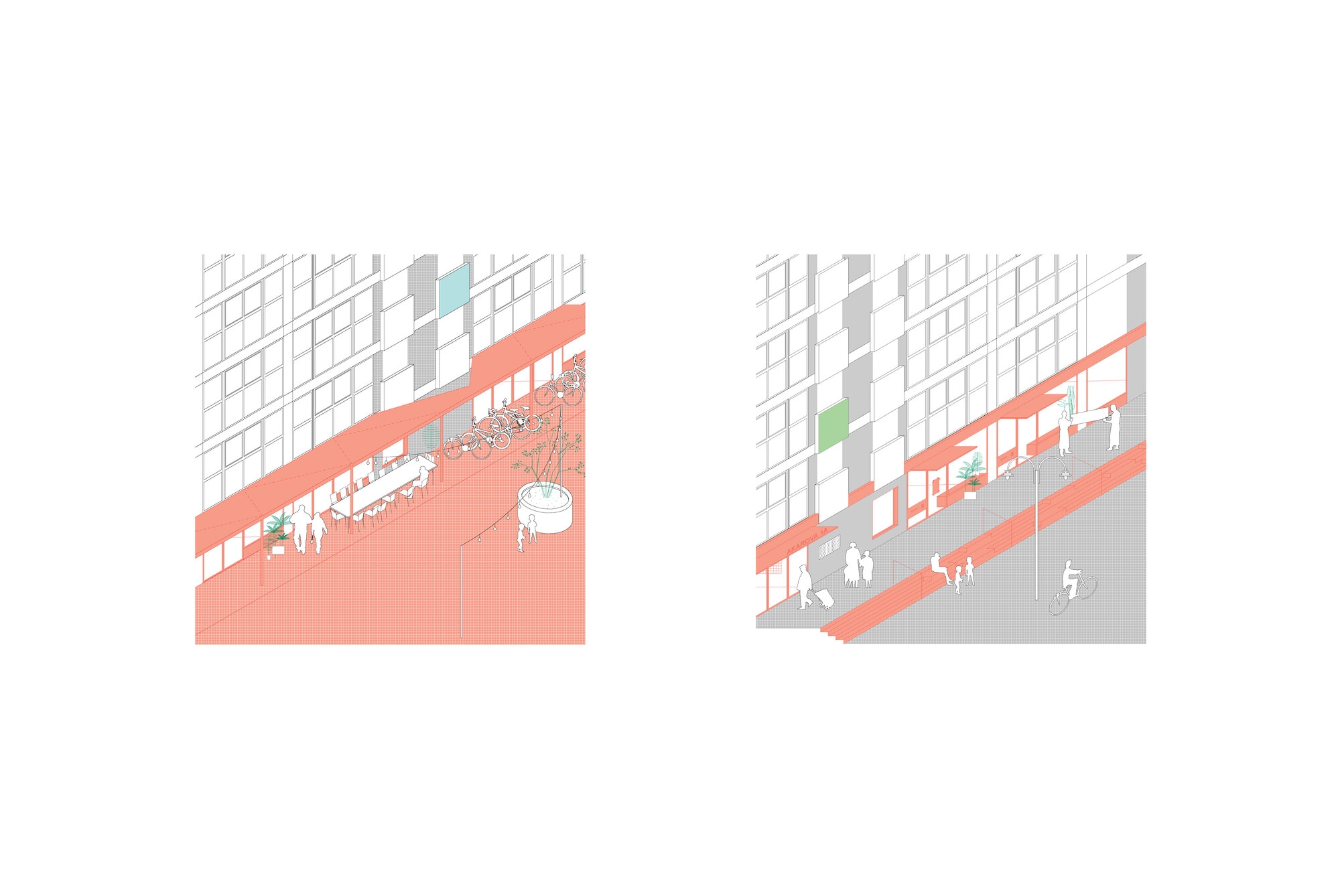 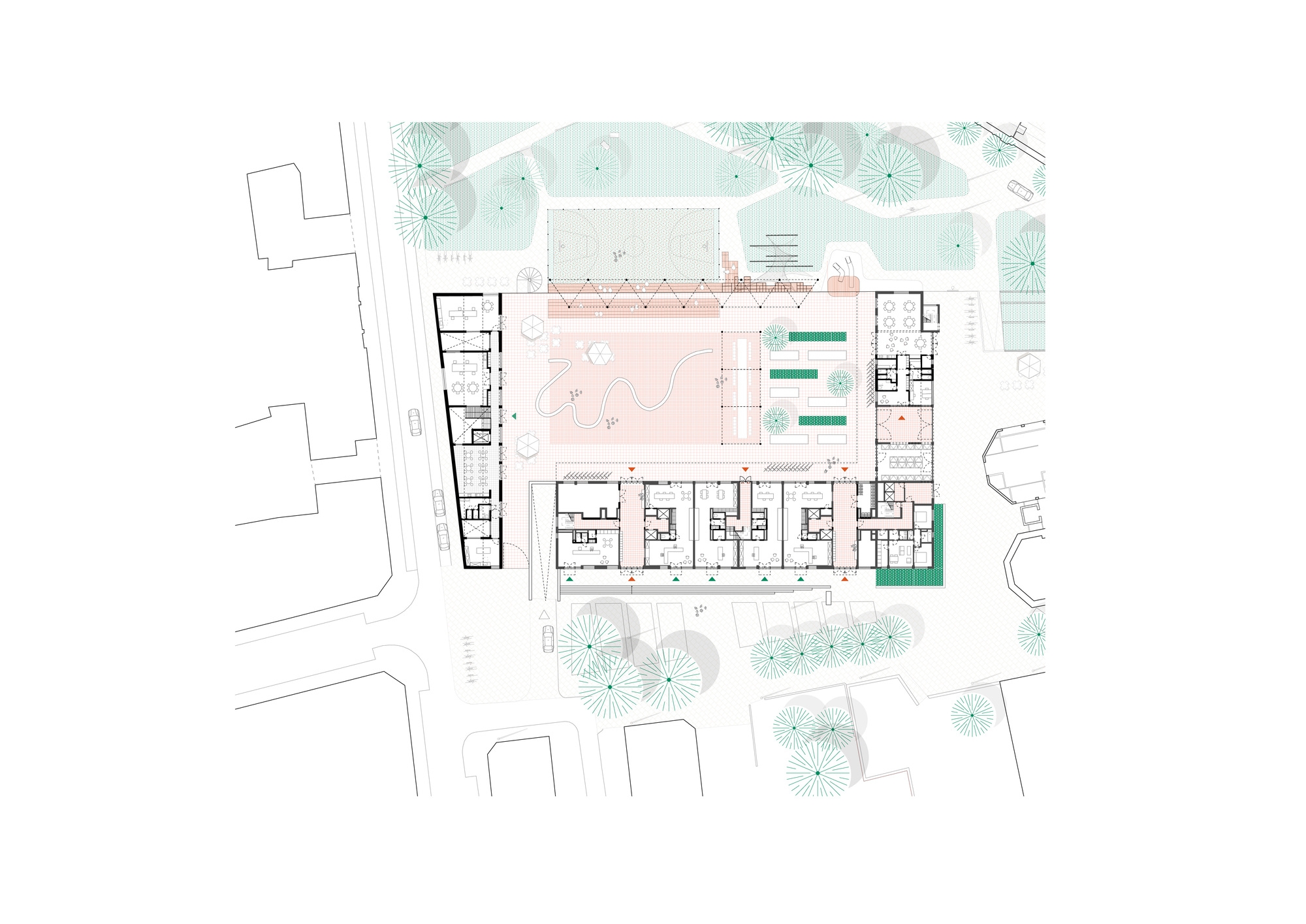 DEVELOPMENT OF PUBLIC OUTSIDE SPACES, OF A MIXED-USE GROUND FLOOR AND OF A NEIGHBOURHOOD WORKSHOP | OPEN COMPETITION ORGANISED BY THE CLIENT

The City is by definition a collective construction. It consists of an ever-changing collection of interventions, which layer their structural and social impacts over time, composing the urban fabric we experience on a daily basis. The « Jonction » neighbourhood in the heart of Brussels, the result of a historical process of « building the city upon the city », constitutes a striking example of this dynamic. Our proposal for the site acknowledges and embraces this process, asserting the qualities of the existing and exploiting the specificities of its urban conditions.

The site, currently heavily fragmented by a series of physical and visual obstacles (topography, steps, blind walls, fences, parked cars, etc.), is simultaneously framed by strong structuring elements such as the railway tracks, the imposing social housing block and its large concrete slab, the church, and the visual perspectives towards the Palace of Justice and the Midi tower. Together with the dynamism of the neighbourhood, fuelled by the strong diversity of its inhabitants, users, passers-by and of local associations, they become the anchoring points for the project, participating actively to the specific character of each of its puzzle pieces.

Our strategy consists on the one hand in reinforcing the individual qualities and spatial definition of the four “urban rooms”: the “Parc de la Jonction”, the “Parvis des Brigitinnes, the Place Akarova and the “Cour du Serpent”. Simultaneously, we propose to topographically and programmatically articulate the relevant stitchings, or “junctions”, between these. The neighbourhood workshop, the “Galerie des jeux” and the restructured ground floor of the tower block, function as enabling structures, encouraging multiple appropriations throughout time.

The project is deliberately split into distinctive interconnected spaces so as to encourage their graspability and appropriation by the different users, as well as allowing independent and parallel evolutions. The existing concrete slab on the ground floor of the social housing complex becomes the “Cour du Serpent”: a collective space dedicated to its inhabitants, publicly accessible while easily controllable, a privileged inner court, an elevated square overlooking the park. In contrast, the “Parc de la Jonction”, the “Parvis des Brigitinnes, and the Place Akarova are clearly asserted as elements of the public realm.

The project as a whole is envisaged as a rich sequence of varied spaces, unrolling beyond the site itself, towards the neighbourhood and the city.