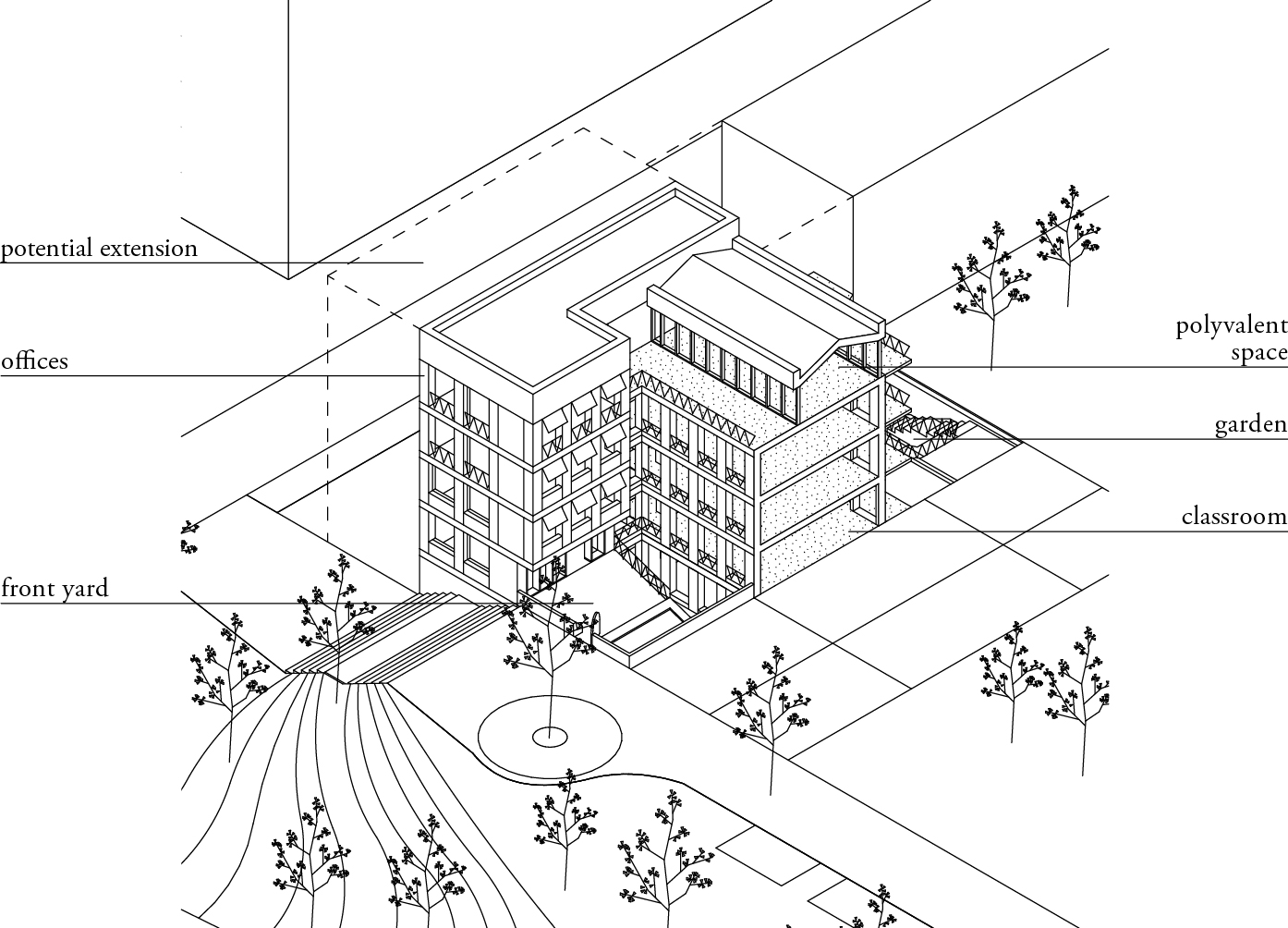 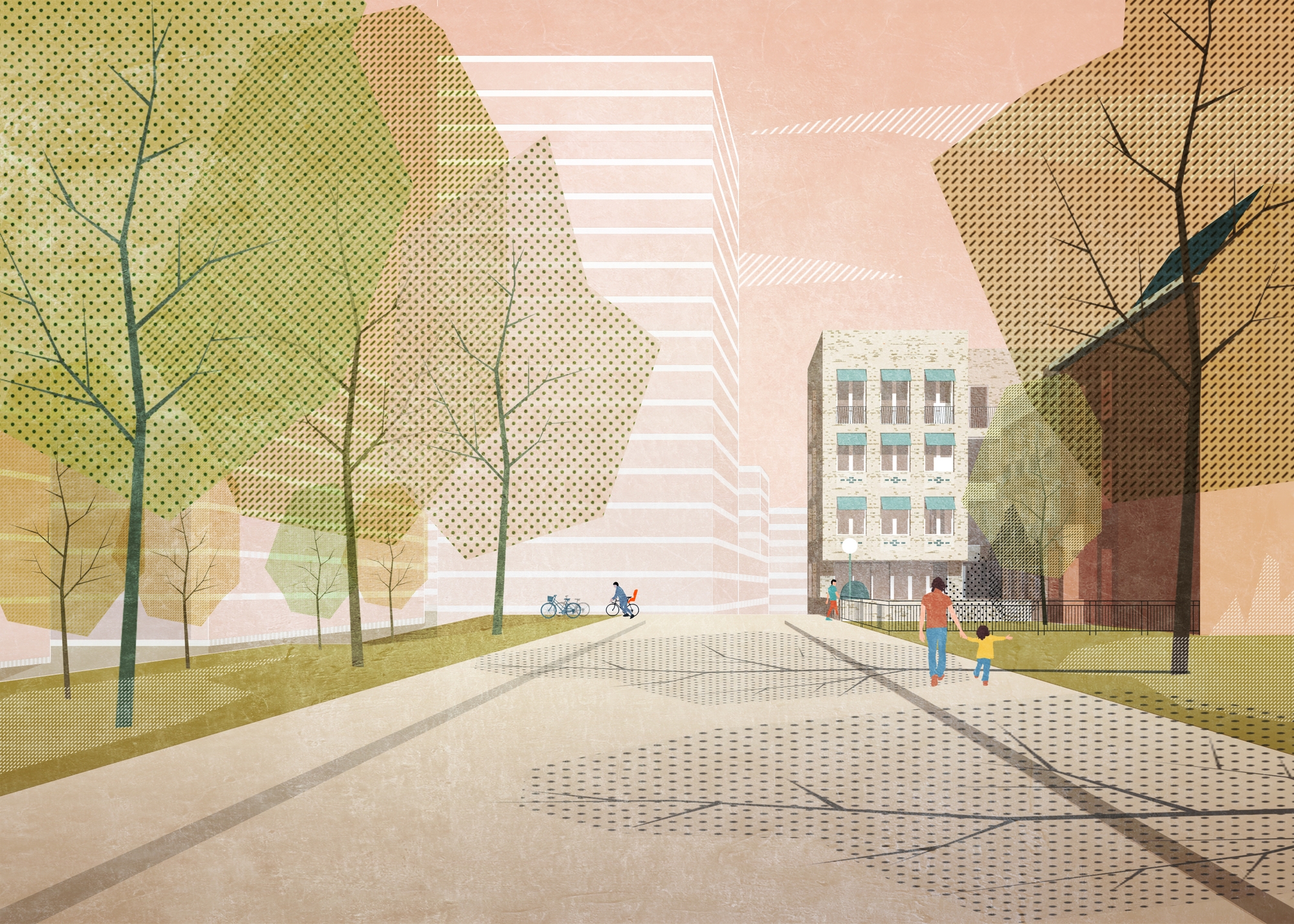 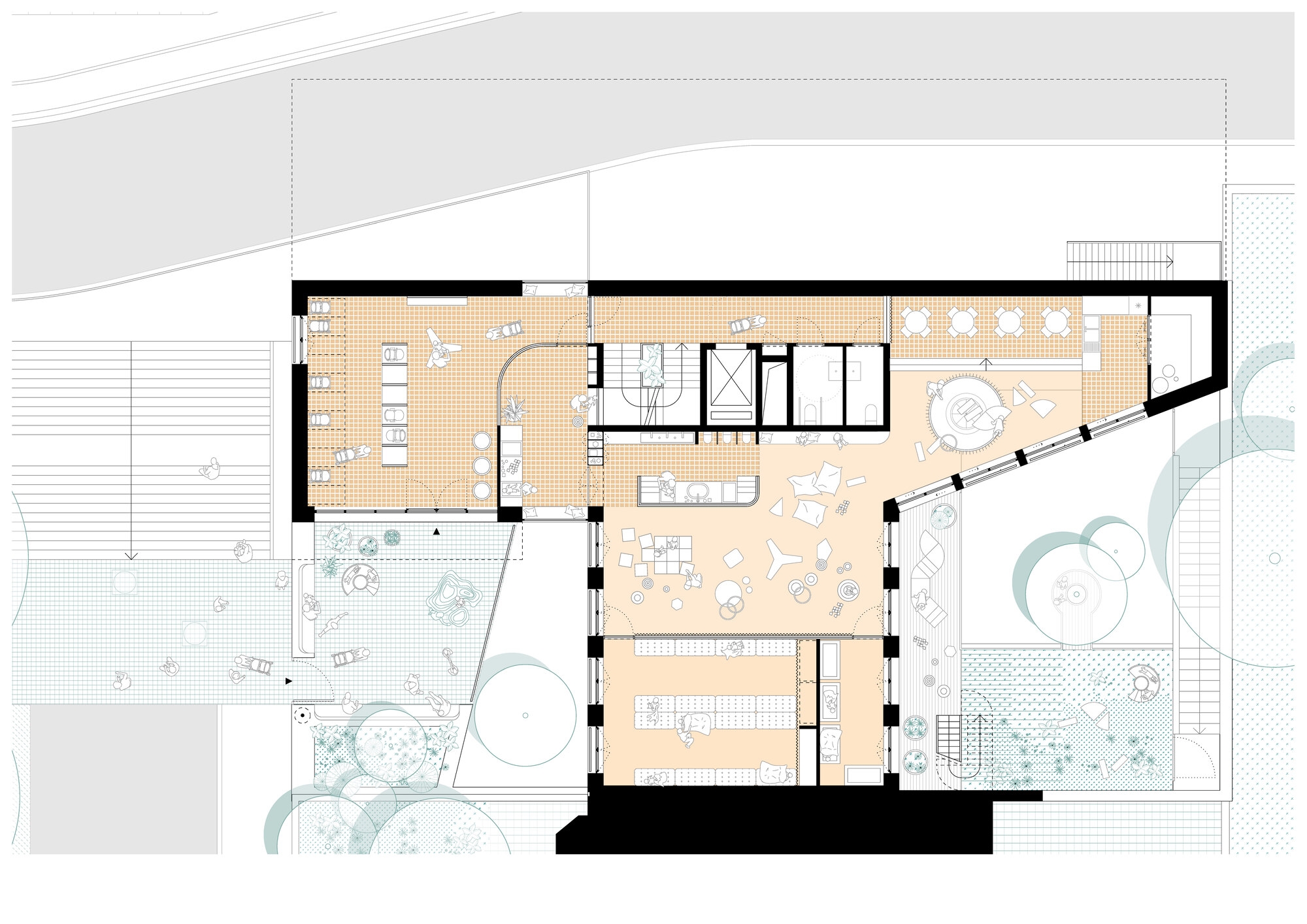 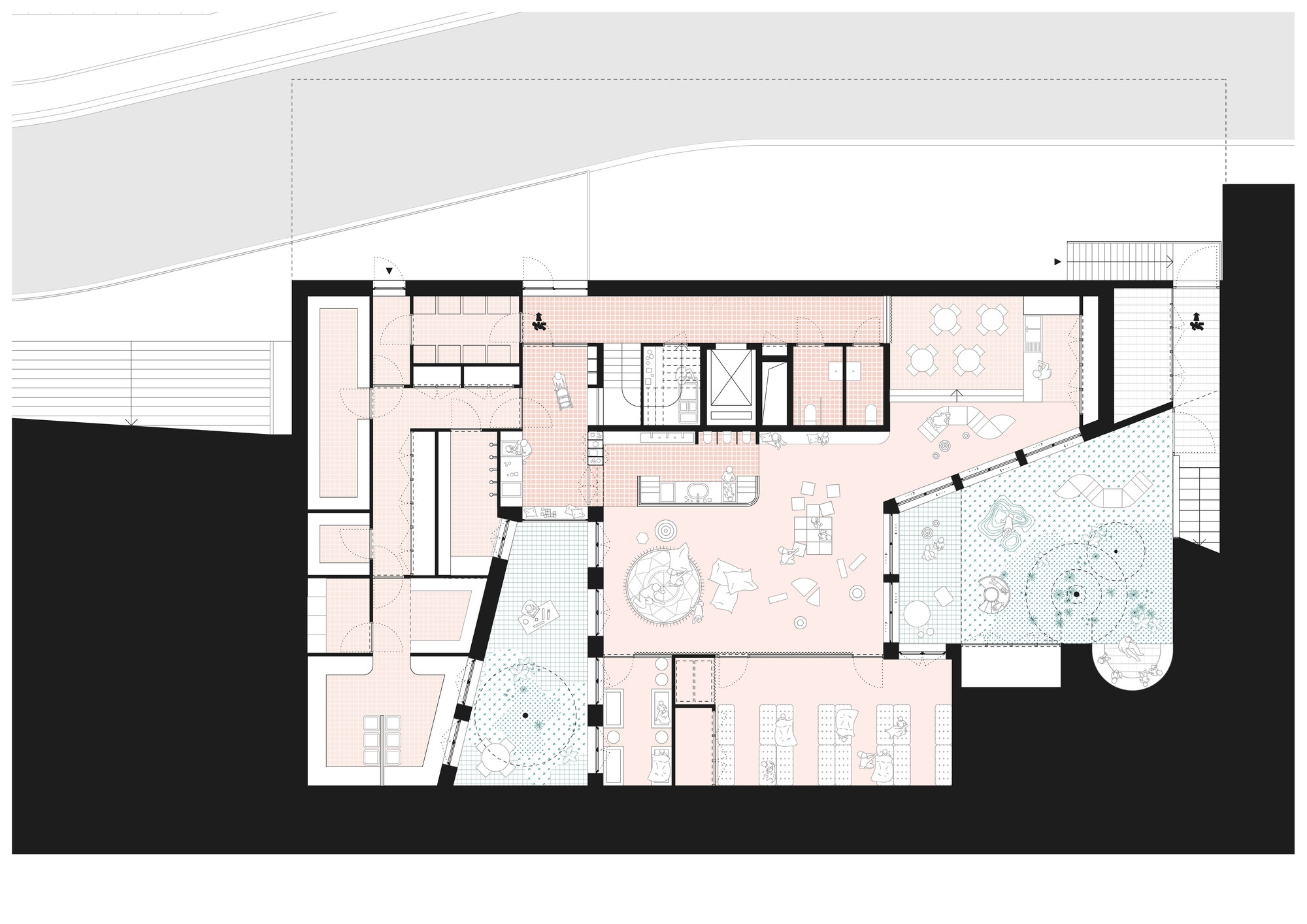 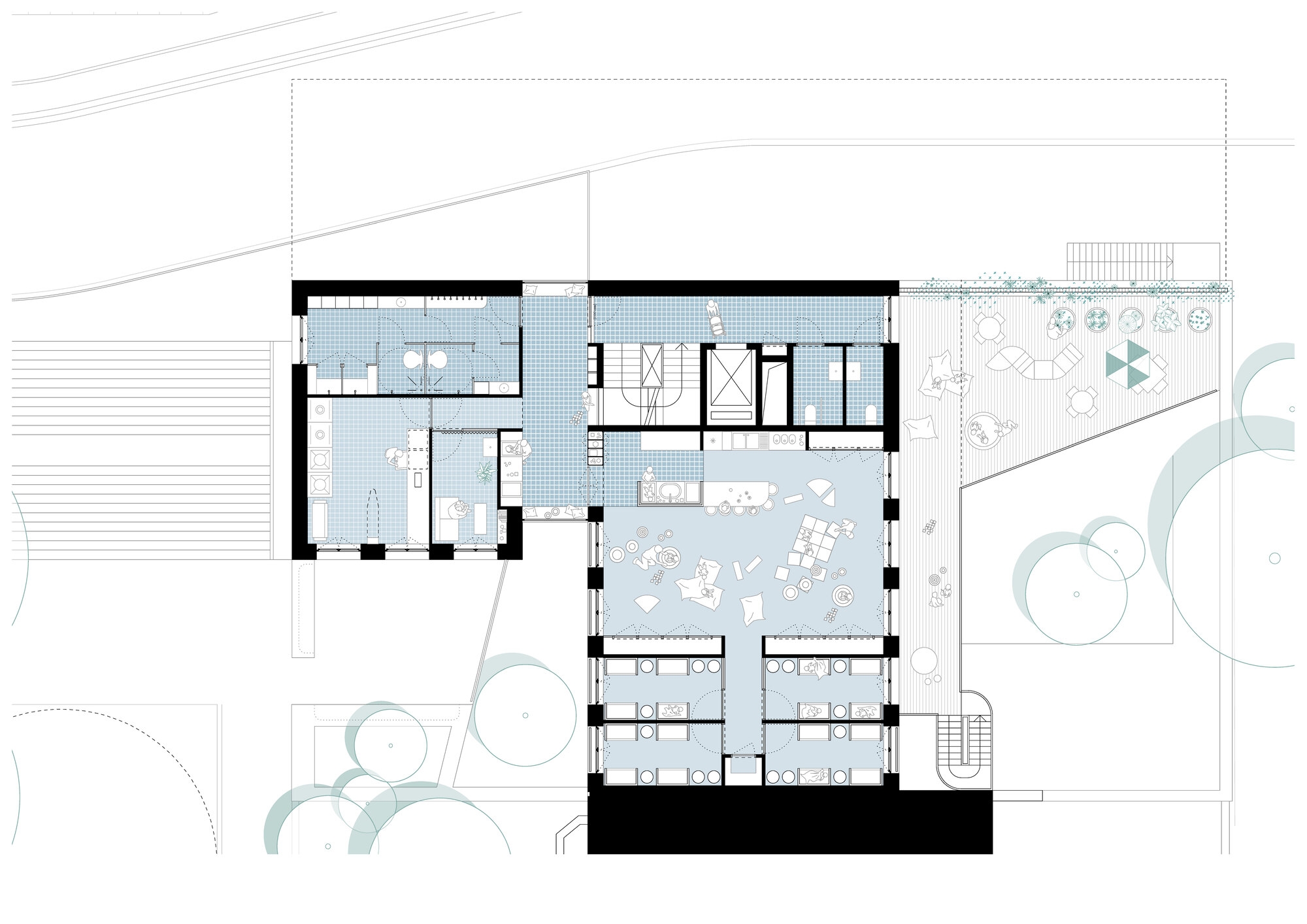 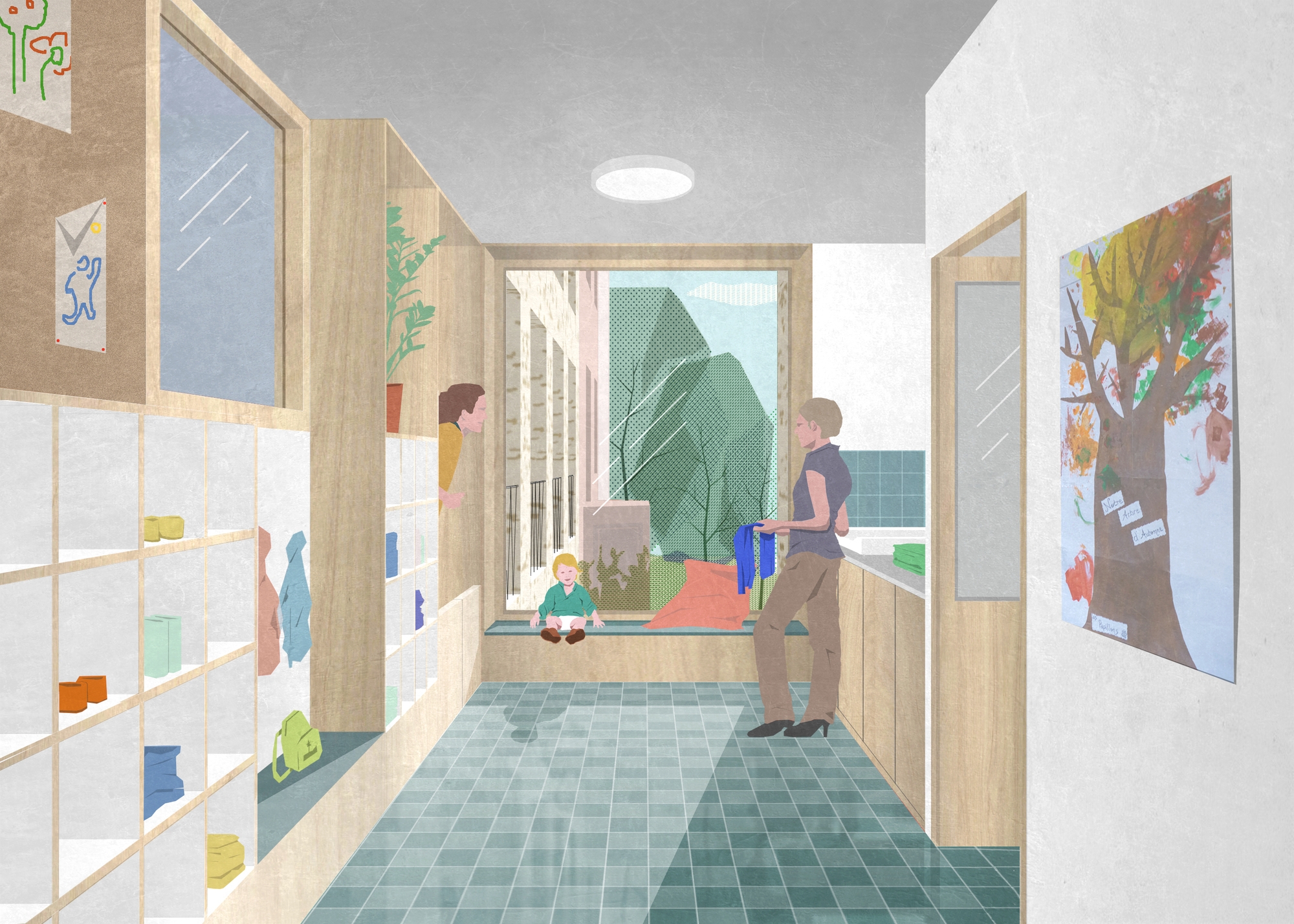 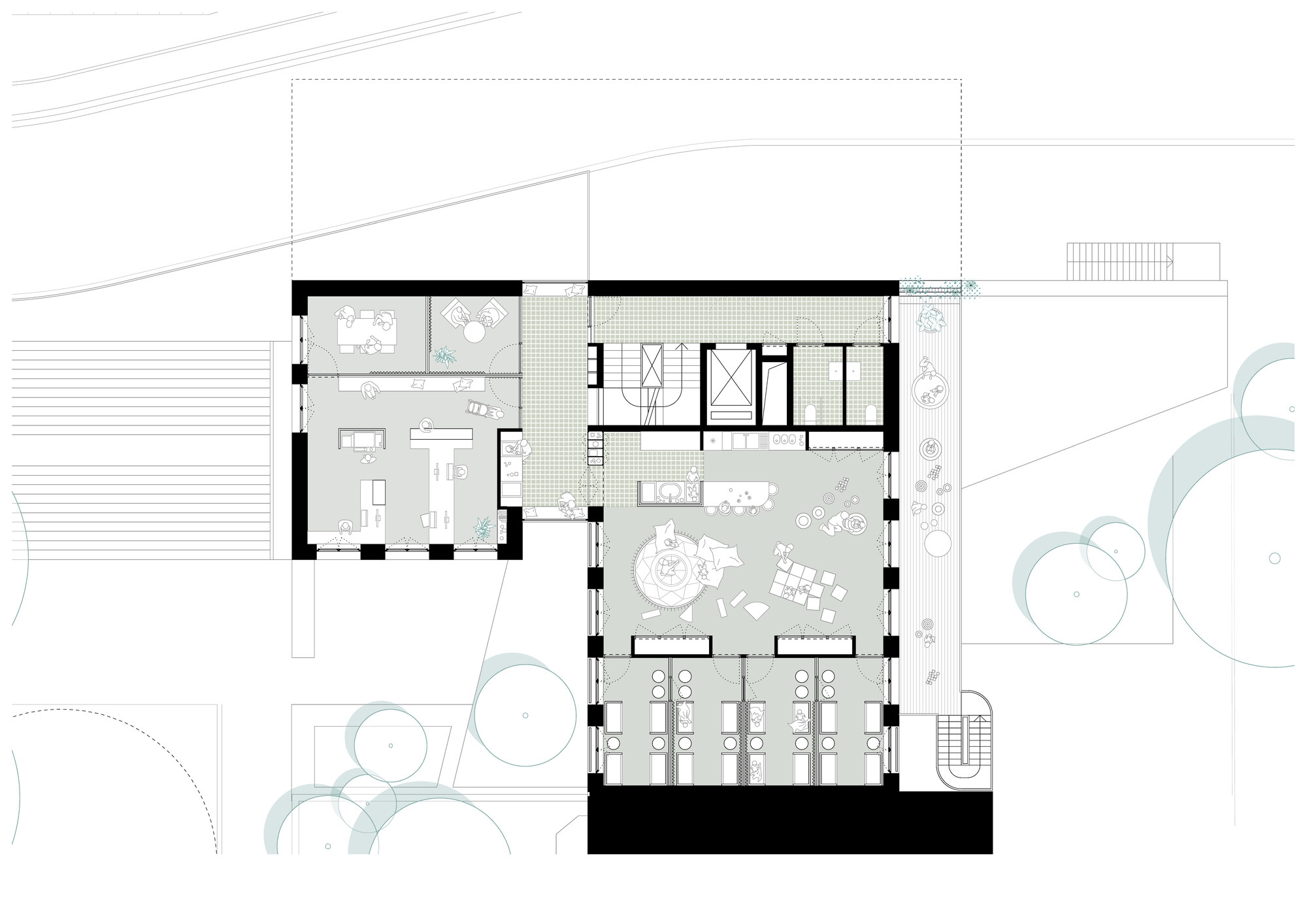 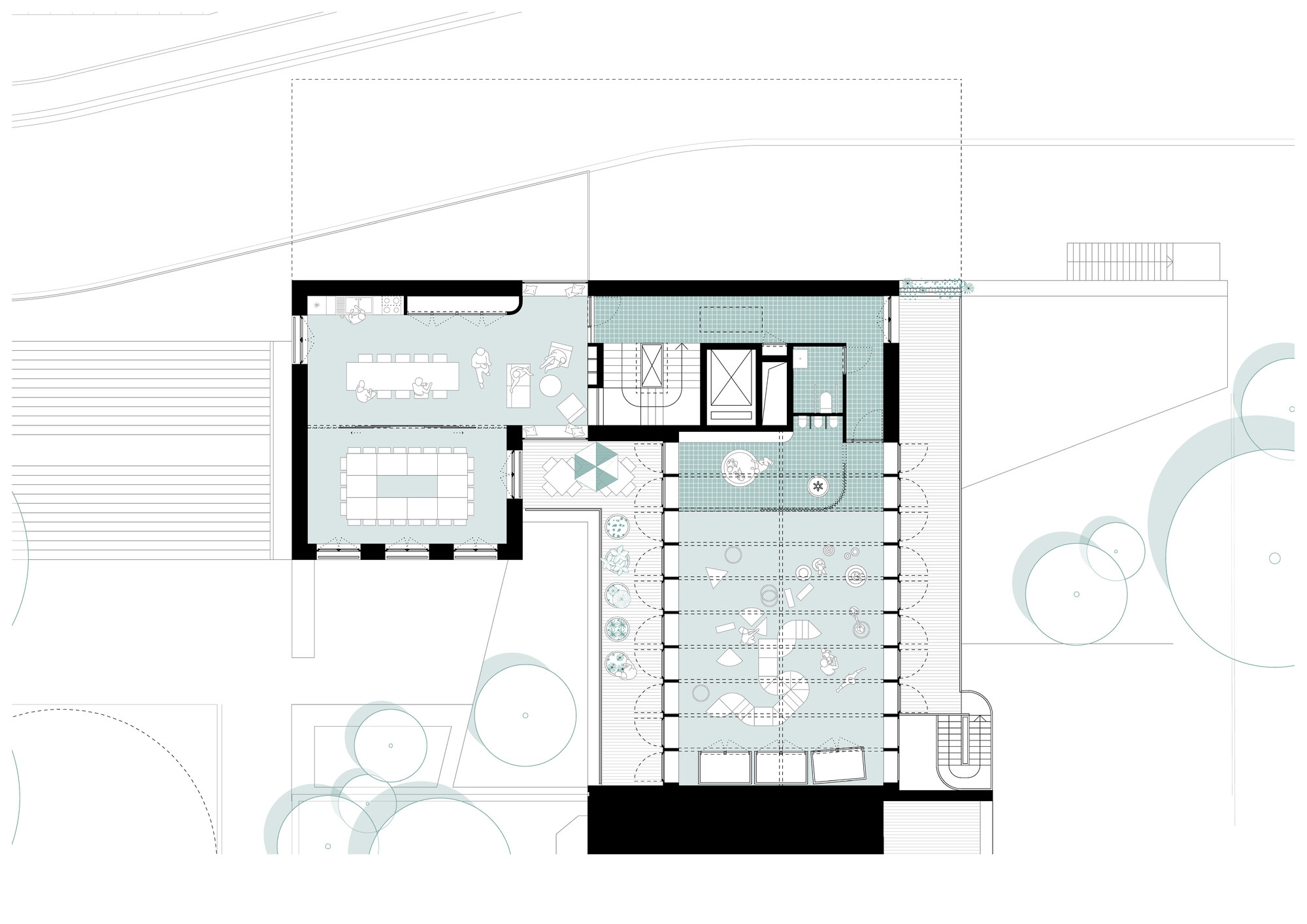 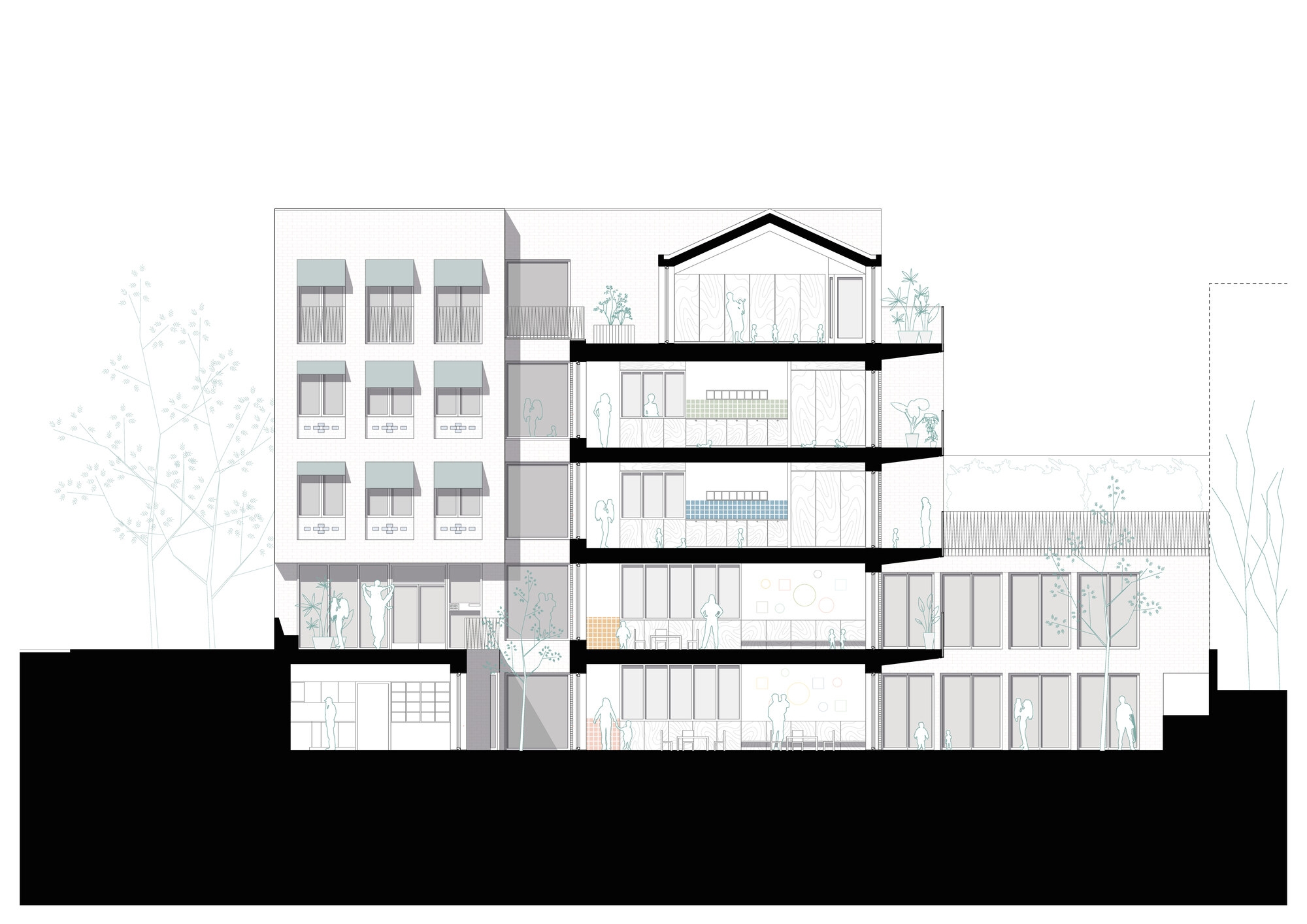 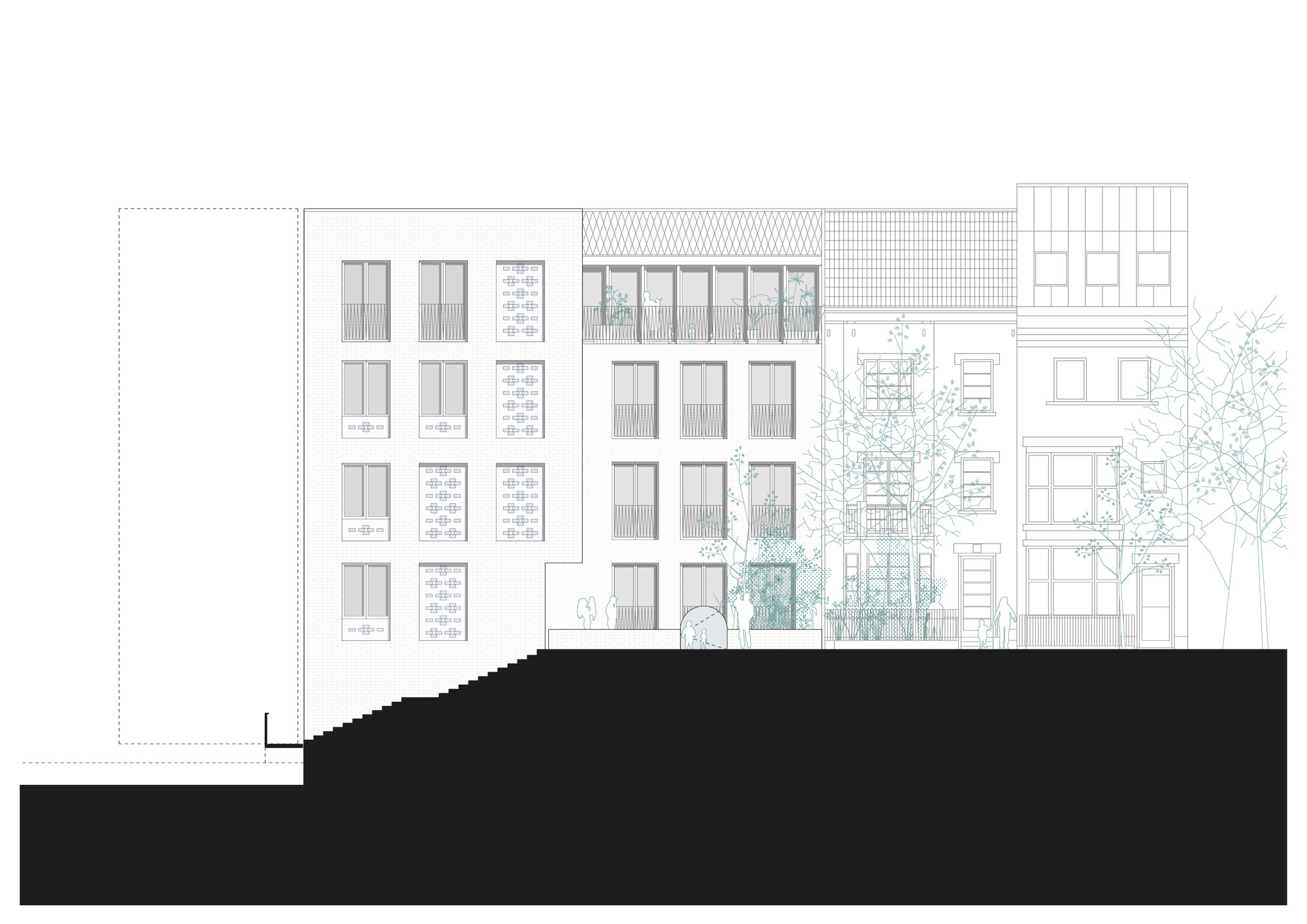 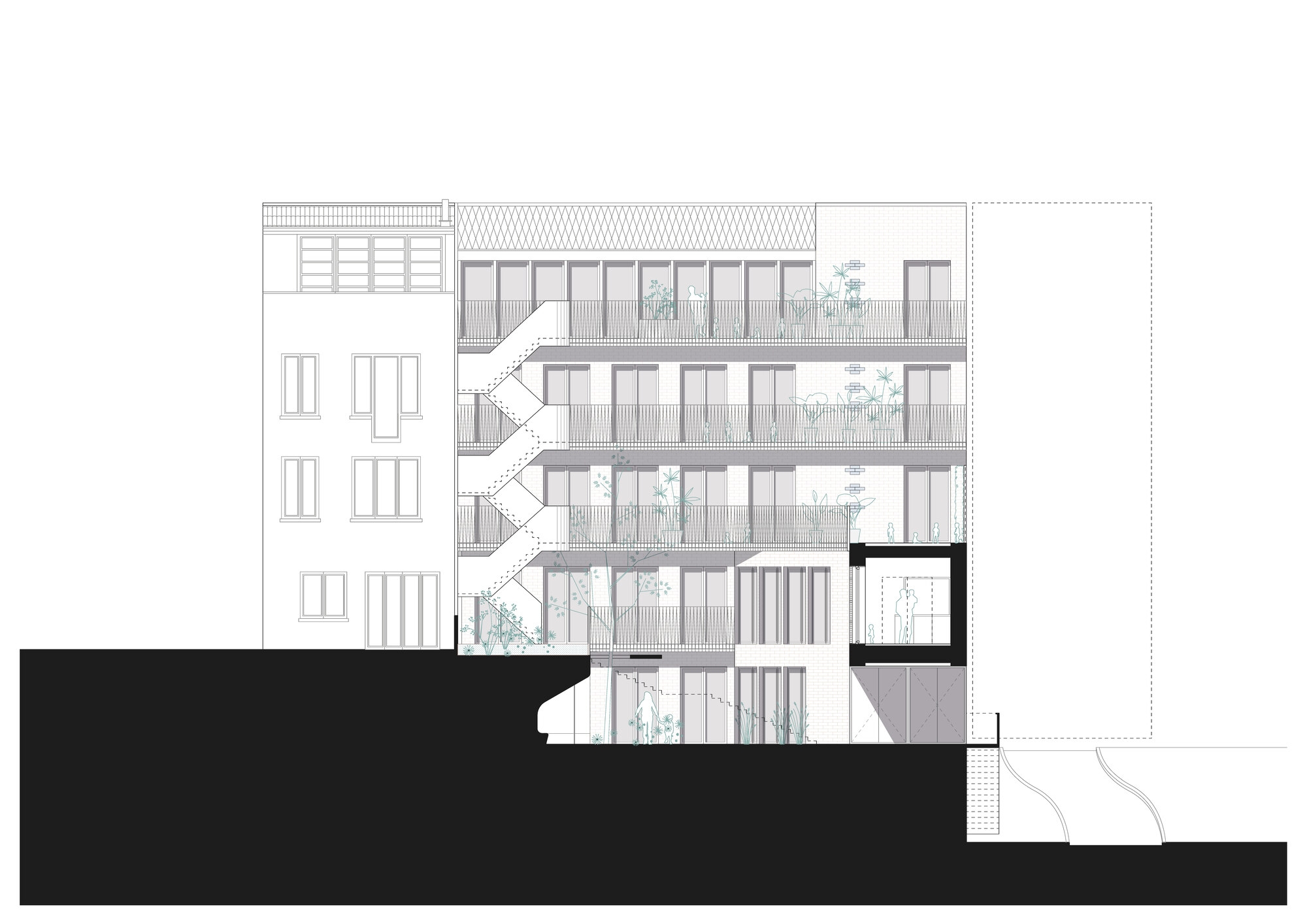 NEW CONSTRUCTION OF A KINDERGARTEN FOR 56 CHILDREN AT THE ENTRANCE OF THE MEDIA PARK, ETTERBEEK | COMPETITION ORGANISED BY THE CLIENT

Babymedia is one of the first operations of the Media Park, on the Reyers site in Brussels. Of modest scale and in close contact with the residential urban fabric, the project aims to initiate the conditions of the Media Park on a city scale while preserving the spatial qualities and the domestic dimension of a kindergarten, both essential components for the personal development of toddlers and young kids.

Composed of two complementary volumes, the building articulates the suburban scale of the Colonel Bourg alley and the metropolitan scale of the Media Park. The first of these volumes extends the morphology of the neighbouring terraced houses. As a large “house”, it shelters the individual living rooms, as well as the common gymnastic and play room dedicated to the care of children. Each of these spaces benefits from a double orientation, and a direct link to generous outdoor spaces facing the inner block. The second volume, positioned on the corner of the block, hosts the spaces dedicated to the kindergarten’s staff. Its proportions and slightly more formal character echoes those of the future Media Park buildings. In need of less privacy than those dedicated to childcare, the spaces face outwards, initiating a dialogue with the neighbouring public spaces and office buildings.

A central circulation core articulates the daily life of the kindergarten, extending into large foyers that form the heart of the building. On each floor, they serve the childcare spaces, the staff areas as well as the future extension of the project. Generous proportions and abundant daylight, make them true meeting places for children, parents and staff alike.